When it comes to fashion, so often what is old is new again—trends and design techniques from yesteryear reworked for today’s style-consciousness. And in the case of Tigra Tigra, the saying has never felt truer. The altruistic brand has been adapting centuries-old Indian textiles and African beadwork traditions into sinuous designs that have garnered a cult following among forward-thinking, global-minded dressers like Solange Knowles. Since 2012, designer Bailey Hunter has been working closely with an Ahmedabad, India–based women’s empowerment NGO cooperative to create silken and hand-embroidered mashroo textiles, which are then transformed into languid pajama sets, wrap dresses, and patterned coats in her Los Angeles studio. Recently Tigra Tigra has expanded its partnerships to cooperatives in Namibia and South Africa. In ethos and aesthetic, the brand is a collision of progressive economic politicis, worldly traditions, and vibrant street culture. And, keeping right in step with the rest of the industry, the line is broadening its reach to include menswear.

Here, Hunter takes us through Tigra Tigra’s collaborative process, from the way artisanal traditions and modern Western culture come together in the brand’s designs to how monsoons influence the final product.

East Meets West
We work between East Los Angeles; Gujarat, India; and Cape Town, South Africa. The majority of my influence comes from these communities. The fabrics are almost all made by hand in Gujarat using traditional techniques like aari and kutch hand-embroidery, leheriya tie-dyeing, and luxurious mashroo silks and khadis. We combine old techniques that the women have learned over generations with a futuristic perspective. I’m very inspired by the way Western corporate branding is taken out of context and interpreted by people around the world. Logos become purely aesthetic motifs and often lose their brand identity—the way I’ve seen Apple logos printed on West African wax-print dresses, or hand-painted Mickey Mouse faces on tuk-tuks. 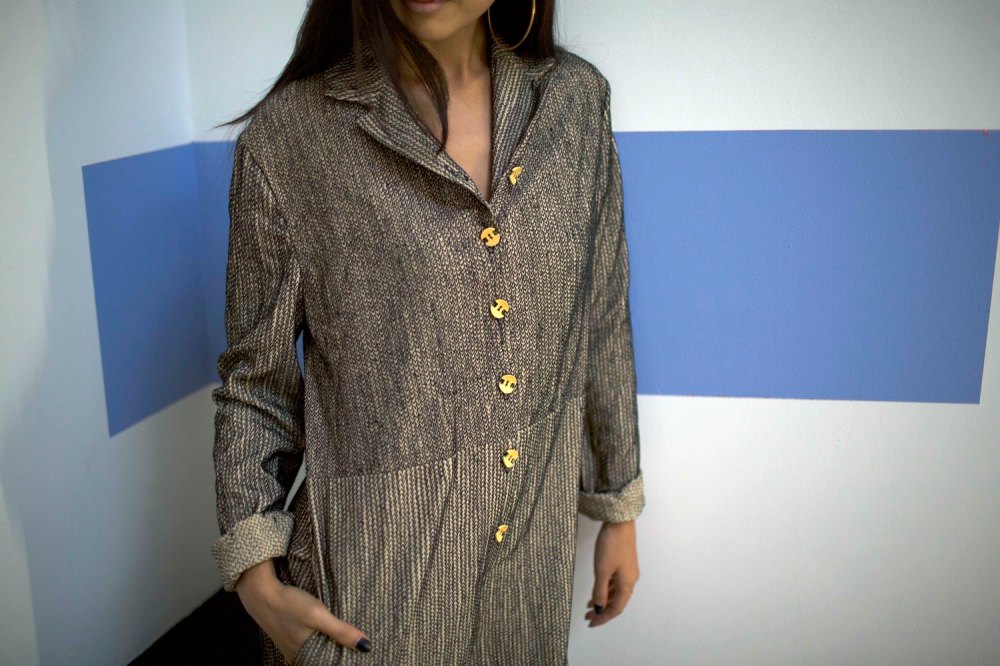 How to Wear Ancient Fabric for Modern Times? With Sneakers!
Mashroo is actually one of the oldest Indian textile craft forms. The wordmashroo is derived from Persian and its literal meaning is “permitted.” In Islam, it is forbidden to wear silk on the skin. Weavers developed a loophole with mashroo, which has silk on the outer warp of the fabric, but a cotton inner weft—allowing the luxurious look of silk without breaking religious law. Wealthy Hindu merchants took notice of this fabric in the 18th and 19th centuries and Gujarat became the center of mashroo weaving in India and introduced brighter colors and tie-dyed patterns. Today, we are still weaving in Gujarat with one of the last remaining mashroo-weaving families in Patan. The oversize shirt and boxing pant set worn with trainers is one of my favorite outfits and also the way my favorite, Solange, wore her mashroo dress—very simple and elegant.

Say It With Hand Embroidery
The hand-embroidered fabrics are some of my favorite because of the strong presence of the human hand. One of our signature embroideries is the hand-embroidered warli, which was traditionally done as tribal paintings by the indigenous Adivasis of Gujarat. Warli uses a basic graphic vocabulary—a circle, a triangle, and a square—and tells a story of domestic and social life, wishes, and desires. We do a mix of embroideries referencing traditional life with more graphic embroideries referencing current urban life such as “New & Improved,” “Say It With Flowers!” or “Sweet’n Low.”

Monsoon Season Can Dictate the Product
We design all the textiles and develop them closely together. Often times, one of the embroiderers has an idea for an embroidery—it’s all very collaborative. Every piece we produce is unique. Monsoon season even affects the patterns and colors—our upcoming collection has much more washed-out tones and less saturation due to it being developed during India’s monsoon season. The humidity causes longer drying times and more sun-bleaching. The same fabric produced a month before monsoon looks entirely different.

Slow Fashion Straight From Namibia
I met anthropologist Megan Laws through a mutual friend. She was doing her field study in the township of Tsumkwe in eastern Namibia and had been living with the San community for around a year. The Ju|’hoansi San are living in such a remote location—there is not much trade or outside opportunity that passes through, and they have been marginalized quite severely by their own government. Megan was interested in putting together a coop to generate an income as many of the women are highly skilled bead-weavers. We held a workshop together in Tsumkwe to create a line of jewelry from crushed ostrich eggshells and glass beaded bags—which take about a month each to complete.

TIGRA TIGRA is a partner in a women’s empowerment NGO in Ahmedabad, India. The organization employs over 500 women in the local community. The majority of the women work daily from their homes in order to manage their family lives while maintaining dignity, financial security and self-reliance.

They also work closely with a non-profit organization based in Cape Town, South Africa and are in the process of setting up a women’s empowerment craft cooperative in Tsumkwe, Namibia.